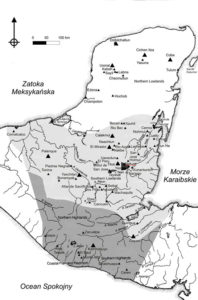 History of research
Located in north-eastern Guatemala (in the area called Triangulo Park), Nakum was oneof the more important centres of Maya culture. For many years scholars avoided this region, due to the lack of local infrastructure and the dangers posed by armed looters and drug smugglers. Nakum’s near-neighbour Naranjo, the largest site in the Park, had been thoroughly plundered (more than two hundred looters’ trenches and tunnels have since been documented there). Nakum was also affected, and many structures at the site were looted and plundered. In 1990s the Guatemalan government established the Triangulo Park (or Triangle Park), a protected area defined by the three great Maya cities of Nakum, Naranjo, and Yaxha. This has dramatically reduced looting activity and created the necessary conditions to start the scientific investigation of these and many other ruins covered by the Park.

Nakum was discovered in 1905 by the French count Maurice de Perigny. Perigny returned to Nakum during his next expedition in 1910. Further reconnaissance was carried out during two brief expeditions organized by the Peabody Museum of Harvard University under the direction of Alfred M. Tozzer. Tozzer and another Maya scholar Raymond E. Merwin produced plans of the major structures as well as a general map of the site. Subsequently, the site was visited by Sylvanus G. Morley of the Carnegie Institution of Washington once in 1915 and several times in the 1920s. In his famous work, “The Inscriptions of Peten”, Morley included drawings and photographs of all carved monuments from Nakum as well as an updated plan of the site based on Merwin’s Map. No further work was done until the visit of Nicholas Hellmuth in 1971 and then in 1973, which resulted in some corrections of the existing maps and a further description of the ruins. Since that time, work done at the site has been under the authority of the Instituto de Antropología e Historia of Guatemala (IDAEH). In 1989, IDAEH initiated efforts to salvage and protect buildings in the core area as part of the Tikal National Project. Formal investigations (in the frame of the so-called Triangle Project or Proyecto Triangulo) were initiated in 1994 with excavations and restoration of the most deteriorated monumental structures located in the core of Nakum. Another line of research focused on the complete documentation and contextual analysis of the Pre-Columbian graffiti identified in the exposed architectural remains at the core of the site. Between 2001 and 2003 investigations were also carried out at the pheriphery of Nakum leading to the discovery of thirty six habitational compounds.  Triangulo Project excavations at Nakum were first supervised by Bernard Hermes and subsequently (between 2002 and 2008) by Zoila Calderón. In 2008 archaeological research at Nakum was completed. However, restoration works carried out by IDAEH in the central part of the site  continued till 2012.

In 2006 a new project under the direction of Jarosław Źrałka and Wiesław Koszkul from the Jagiellonian University (Cracow, Poland) started excavations at Nakum. This webpage presents the major results the latter project. 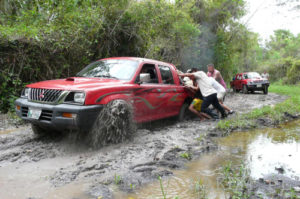 The beginnings of Polish research at Nakum
Polish contributions to research in the Triangulo Park began already in 1999, when students Justyna Olko from the University of Warsaw and Jarosław Źrałka from the Jagiellonian University, took part in a Guatemalan project in Nakum, Yaxha, Naranjito and El Tigre. Another scholar – Wiesław Koszkul joined the Triangulo Project research in 2002 participating in investigations carried out at Topoxte and Nakum. In 2005 Jarosław Źrałka and Wiesław Koszkul asked the Guatemalan government for permission to start an independent research project at the latter site. The request was granted and in 2006 the first Polish archaeological project in Guatemala began. However, before Polish scholars could put the first shovel into the ground at Nakum there were some basic necessities that had to be attended to. The most important was the establishment of a camp. Struggling with a tight budget, a bare-bones house with basic amenities was constructed close to the ruins. The house served both as a kitchen and a laboratory, and was equipped with furniture that was made from trees from the surrounding jungle and planks brought from Santa Elena, more than 80 kms away. Food and water supplies had to be transported a couple of times a week from the same town. Transportation during the rainy season caused additional hardship; when it began to rain, even an off-road truck often could not get through the jungle and would get bogged down in the mud several kilometres from the camp. When this happened, more than a dozen people would hike through the flooded rainforest to heave the car from the wet earth. The most difficult season, in terms of the weather, was the 2008 one – due to prolonged rainfall, the level of the Holmul River, which flows close to the site of Nakum, rose nearly 2 metres. The area around the camp-site was completely flooded, forcing the archaeologists to evacuate all their equipment and documentation from the camp. This turned out to be quite an adventure with more than 30 people pulling the car with its load through the river, struggling against a current grown turbulent by the heavy rains. Forced to carry the load on their backs, many arduous hours of trekking through the rainforest finally brought our archaeologists to the ruins of Yaxha, from where they were picked up and brought back to Santa Elena. 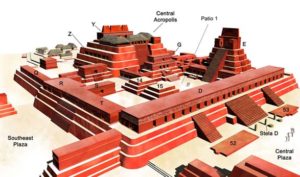 Made by Quetzal Studios